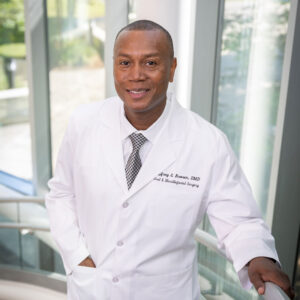 Dr. Jeffrey S. Brown, DMD received his B.S. degree in Biology and Microbiology from Mississippi State University and obtained his DMD in 2001 from the University of Mississippi School of Dentistry. In 2005, he completed his postdoctoral training in Oral and Maxillofacial Surgery at Howard University Hospital and its affiliated hospitals in Washington, D.C. and the Bronx, New York.

After his residency, Dr. Brown attended the United States Air Force Officer Training School. He then joined the staff at Mike O’Callaghan Federal Hospital at Nellis Air Force Base in Las Vegas as Captain and Staff Oral and Maxillofacial Surgeon. During his tenure, Dr. Brown was promoted to Major and received the Air Force Commendation Medal for distinctive accomplishments.  In 2009, Dr. Brown was assigned to Keesler Air Force Base in Biloxi, MS.  While at Keesler, he received the Air Force’s Junior Clinical Dentist of the Year Award and Field Grade Officer of the Year in 2010. In 2012, he was promoted to Lieutenant Colonel.  For his outstanding accomplishments, Dr. Brown was awarded the Meritorious Service Medal.

Dr. Brown is a diplomate of the American Board of Oral and Maxillofacial Surgery and fellow of the American Association of Oral and Maxillofacial Surgeons. His professional areas of interest include oral pathology, reconstructive and implant surgery, and orthognathic surgery.  Dr. Brown also maintains a strong interest in academic research and publications with a focus on pathology and reconstructive surgery.

When not performing oral surgery, Dr. Brown is involved with various humanitarian missions that have included service to Panama and the Dominican Republic. He is married to his wife Zandra and has been blessed with the honor of raising their three children: Ryan, Jalyn, and Zoey.

Back to the top